When using IQRF I often dealt with the problem of handling obstacles that IQRF brings. Finally I realized that the best solution is to use something else .... some open-source solutions. IQRF modules is nothing more than a device produced together with a processor and a wireless part. I have Arduino at home and it seemed to me that this is actually very excellent candidate. I brushed Arduino for which I had no greater utilization. And I started to research how to implement wireless communication with Arduino. The advantage is that the Arduino has excellent support and is simple to put into operation which means basically no initial barrier at the beginning of use. That is why I decided to create its own wiring with the microprocessor Atmel and wireless part.

IQRF is final wireless platform with PIC processor. It is product from Czech company Microrisc s.r.o. .

Arduino is open-source platform for prototyping with microprocessor Atmel.

From my practical experience of using, I found that with Arduino is quick and pleasant development. 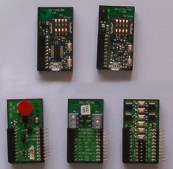